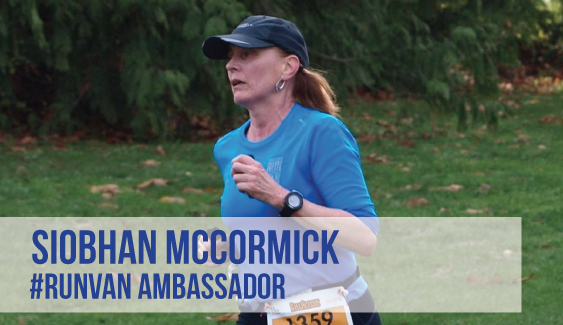 Meet Siobhan, a research technician in the PET Program of the Pacific Parkinson’s Research Centre at UBC and a pace group leader for the Right Shoe run clinics. Siobhan began running in January 2008 as part of a challenge to do some form of exercise every day for a month. After completing her first 10K at the Sun Run in April of that year, she was hooked and seeking greater challenges. She joined The Right Shoe Run Clinic in the spring of 2008 and has continued to run with the group since that first clinic. She has been a pace group leader for The Right Shoe run clinics on and off since 2010. She has also led pace groups for the Sun Run Training clinics since learning to run with them in that winter of 2008!

With 50 plus races under her ‘fuel’ belt, Siobhan has completed the Vancouver Marathon four times (both old and new courses) and the Vancouver Half Marathon twice. She ran the Boston Marathon in 2013 and 2016. Siobhan feels incredibly fortunate to live in a city with so many beautiful running routes and with such a supportive running community and is honoured to represent the Vancouver International Marathon Society as an ambassador.

It was in 2009 and I had committed to run it with a couple of friends. As luck would have it I ended up being the only one of us who trained and ran it that year!  I did a big chunk of my training on my own in Montreal due to a family tragedy. The weather in Montreal was terrible — very cold and stormy — I remember my fluids kept on freezing during my long runs. I am stubborn though and as I had committed myself to doing the marathon I was not going to jam out!  The race course was the old one. I went out way too fast and having no real sense of pacing — I had just started running the year before — I paid for it dearly. By the end of the race I could barely walk. But I finished! I was really proud of myself for persevering with the odds stacked against me like that. The running scene has just exploded since then! You could literally run a race every weekend but the Vancouver Marathon is still the best to run.

Name a few of your favourite points along our course. Why do they stand out for you?

The section of the race that starts at the bottom of Camosun until you turn onto West 16th Ave is for me one of the most beautiful parts of the race. Camosun hill is super tough and I can’t say I ‘enjoy’ it but running that whole section beside the forest of Pacific Spirit Park is incredible. I also love running Stanley Park because not only is it beautiful with the ocean on one side and the park on the other but it is also really familiar to me and it’s nice to be 32Km into a marathon and know what is coming.

I try to have written out a Plan A and a Plan B for race day sometime in the weeks before: Plan A for when everything is going well and Plan B for what to do if the wheels fall off. I work on visualizing my race and going through Plan A/Plan B a few times in the weeks leading up to the race. The week before I make sure to get my rest and keep hydrated. The night before I lay out my race gear, pin my bib on, organize my gels and fill my water bottles and stick them in the fridge. I eat an early dinner — something pretty bland so it won’t upset my stomach. I go the bed early. On race day I get up and eat breakfast about 2.5 hours before the race — usually steel cut oats with berries. I get to the race site about 1.5 hours before the race and do a warm-up with my running clinic. Then a visit to the port-o-potties and into the corral to wait for the start!

The best advice I’ve received came from my running coach, the awesome Lara Penno, and it is to run your own race. Don’t worry what others around you are doing, stick with your plan and execute it the best you can on that day AND don’t forget to smile when you cross the finish line. It is a huge accomplishment to run a marathon and you should be proud of yourself for just getting out there and doing it!